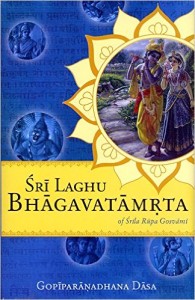 Sri Laghu-Bhagavatamrta is a magnum opus by Srila Rupa Gosvami further embellished with the intricate and vivid commentary by Gopiparanadhana Dasa. This theological milieu by the ace hermeneutic Srila Rupa Gosvami establishes Lord Sri Krsna as the Avatari, or the Source of all incarnations, upholding His pre-eminence as the superlative original Supreme Personality of Godhead.

Rupa Gosvami’s elder brother Sanatana Gosvami composed Sri Brhat Bhagavatamrta wherein the highest of all devotees, was intricately and sequentially established. Sri Rupa Gosvami felt the need of establishing the epicentre of this devotion of the devotees, i.e. the Supreme Lord Sri Krishna Himself with all His potencies and opulence, clearly outlining the relationship between Sri Krishna and His emanations. Hence as a subsequent edition to Sanatana Gosvami’s Brhat (greater) Bhagavatamrta, Rupa Gosvami composed the Laghu (concise or lesser) Bhagavatamrta as an offering to his brother. He presented Sri Laghu Bhagavatamrta in the typically concise style of philosophical thesis: short definitions and statements of fact with the support of quotations from authoritative scriptures, which are then often followed by the author’s own explanatory verses.

In the sixteenth century, Srila Rupa Gosvami had authored Sri Laghu Bhagavatamrta, an era where there was dire need to prove Lord Krishna is the Supreme Personality of Godhead. Most Vaisnavas then accepted Lord Visnu as the original form of the Supreme Lord, considering Krishna merely one of His incarnations-albeit the most beloved of the Lord’s many forms. Much has changed since this marvel was penned down, however the need to demonstrate that Sri Krishna is the Supreme Personality of Godhead predominantly exists till date. In a modern world permeated by varieties of atheism, voidism and impersonalism, this masterpiece has great relevance for the spiritual lives of all sincere seekers, especially devotees of Krishna.

Rupa Gosvami articulately, with sheer erudition establishes Lord Krishna to be the Supreme Personality of Godhead, which is the foundational axiom of Gaudiya Vaisnava belief and principle. Laghu Bhagavatamrta pushes Gaudiya Vaisnavism to a realm far beyond the poetic sentiment or personal opinion, using some serious philosophical exegesis. This crème de la crème of Vedic knowledge is divided into two parts:

Part 1 introduces the readers to the anatomy of Bhagavan along with His emanations and incarnations, while Part 2 classifies His devotees according to the depth of their devotion.

Gopiparanandhana Dasa, with utmost brilliance in Sanskrit language and profound knowledge, following the footsteps of the stalwarts of Gaudiya Vaisnava society and Srila Prabhupada, corroborates the sublime assertion of every scripture by translating the original text as authored by Rupa Gosvami. The book’s numerous appendices were completed by Giriraja Publishing’s researchers after Gopiparanandhana’s untimely departure. The impeccable foreword to the book was written by Professor Dr. Edwin Bryant and the eloquent preface by Mukunda Datta Dasa of Vrindavan.

Your blogs are amazing. I also have wrote a blog… by Gyanbygurus

on In Praise of Bhagavad Gita

haribol...I'm so happy to come across this treasure it will… by khusboo

on In Praise of Bhagavad Gita

Open letter to Steven Rosen and Kaisori Bellach, writers and… by Mala Frank-Gavin

This website uses cookies to improve your experience while you navigate through the website. Out of these cookies, the cookies that are categorized as necessary are stored on your browser as they are essential for the working of basic functionalities of the website. We also use third-party cookies that help us analyze and understand how you use this website. These cookies will be stored in your browser only with your consent. You also have the option to opt-out of these cookies. But opting out of some of these cookies may have an effect on your browsing experience.
Necessary Always Enabled
Necessary cookies are absolutely essential for the website to function properly. This category only includes cookies that ensures basic functionalities and security features of the website. These cookies do not store any personal information.
Non-necessary
Any cookies that may not be particularly necessary for the website to function and is used specifically to collect user personal data via analytics, ads, other embedded contents are termed as non-necessary cookies. It is mandatory to procure user consent prior to running these cookies on your website.
SAVE & ACCEPT