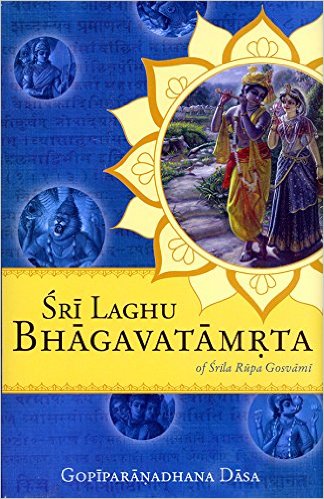 Srila Rupa Gosvami composed Laghu-bhagavatamrta as a sequel to Brhad-bhagavatamrta, highlighting the Lord Himself. In one sense, then, the Laghu-bhagavatamrta is the creme de la creme of the Vedas, in that it focuses on the essential and primary truth known as sambandha-jnana, preliminary understanding of the relationship between God and all his emanations.

Availability: Out of stock

The Brihad-bhagavatamrita of Srila Sanatana Gosvami, Rupa Gosvami’s elder brother and another chief disciple of Sri Caitanya Mahaprabhu, highlights the pure devotees and the various forms of the Lord they worship with their respective abodes. Srila Rupa Gosvami composed Laghu-bhagavatamrita as a sequel to Brhad-bhagavatamrta, highlighting the Lord Himself. In one sense, then, the Laghu-bhagavatamrta is the creme de la creme of the Vedas, in that it focuses on the essential and primary truth known as sambandha-jnana, preliminary understanding of the relationship between God and all His emanations.

When Srila Rupa Goswami authored this Laghu-Bhagavatamrta in the sixteenth century CE, even Vaisnavas commonly accepted Lord Vishnu as the original form of the Supreme Lord, considering Lord Krishna merely as one of His avataras albeit the most beloved of the Lord’s many forms. The milieu in which Srila Rupa Goswami wrote has since changed greatly, but the need to demonstrate how Lord Krishna is the Supreme Personality of Godhead remains today, when so few believe in any God at all – much less God as a small, dark, flute-playing cowherd boy named Krishna. Srila Rupa Goswami herein provides a compelling scriptural exegesis of that assertion. Modern life is permeated by various modes of atheism, voidism, and impersonalism; thus, this book has great relevance for the spiritual lives of all sincere seekers, especially those aspiring to be devotees of Krishna.

The current rendition presents a high standard of scholarship with superb commentary by Gopiparandhana Dasa based on that of Baladeva Vidyabhushan, the famous commentator and follower of the Gosvamis – written very much in the mode, style, and tone of traditional commentators – engaging the purvapaksa (opposing point of view), and yet free from sectarianism and polemics.

Be the first to review “Sri Laghu Bhagavatamrita” Cancel reply